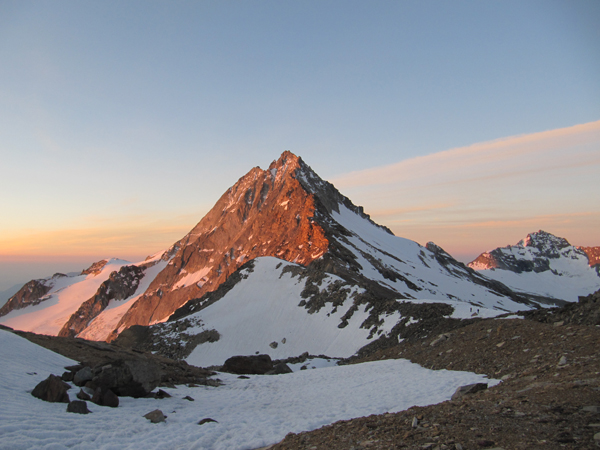 This tour is very demanding as it includes a tract fitted with iron cables and steps and touches upon very harsh and severe mountainous areas.
The Andolla Peak is a beautiful rock pyramid that rises along a ragged crest which from the Monte More Mountain Peak reaches the Zwischbergen Mountain Peak, a mountain chain that runs at about 3,000 meters above sea level and joins up with the Antrona mountainside via vertical mountainfaces popping out from infinite heaps of stones.
The descent on the Vallese side is on the other hand less impenetrable, softer, and now covered by conspicuous agonizing glaciers. These mountains are harsh and wild «... and their fine denticulation can be seen very well from the Milan Cathedral (Duomo di Milano), blindingly overshadowed by the Mischabelhorner Glaciers which can be seen behind their brown lineages…».
The Andolla Peak takes its name from the underlying high Loranco Valley Alpine pastures, while its German name is Portjengrat, a name which is used to refer to the entire crest which from Porta di Loranco arrives at the Zwischbergen Mountain Pass.
«Whoever would see or go up the Andolla from the Swiss side would not certainly have justified the enthusiasm of those who would have admired it from the Italian side. It is on the Italian side that an alpinist must complete their ascent in order to be able to report back a strong pleasant experience» Alessandro Bossi (1900).

Number of stages of the route