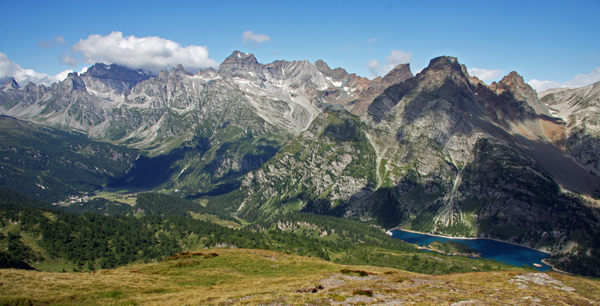 The river-crossing of the Albrunpass is the most followed itinerary that gets us to Binn. The way up from the Devero side of the mountain takes place amid blue lakes, larch woods, and an extensive series of ridges. The path can always be seen and is well-marked.

While following this itinerary we walk along the relics of a medieval mule track which for decades used to be crossed by an infinite number of merchant caravans, pilgrims undertaking walks as part of their rituals, soldiers, and smugglers. Thus, following this path is like taking a walk through history.

From Devero we go up to Crampiolo passing by the nice path with stone-paved tracts which passes from Ardui Court (Corte d’Ardui). Thus, by walking amid some of the most high-altitude meadows set aside to be mowed, we go up to the great dam of Codelago, coasting the lake up to its end where via a brief way up we reach the Pianboglio Lake. Having surpassed the small broken dam we coast the lake on the side of the meadows, surpass a small bridge on the river that goes down to the Forno Alp and start going up via an always well-marked path up to reaching the Arbola Small Mouth (Bocchetta d’Arbola

E (medium difficulty). The tract is exposed between Larecchio and the bottom of the lake: pay attention. The only steep tract is the one from the Pianboglio Lake to the mountain pass.