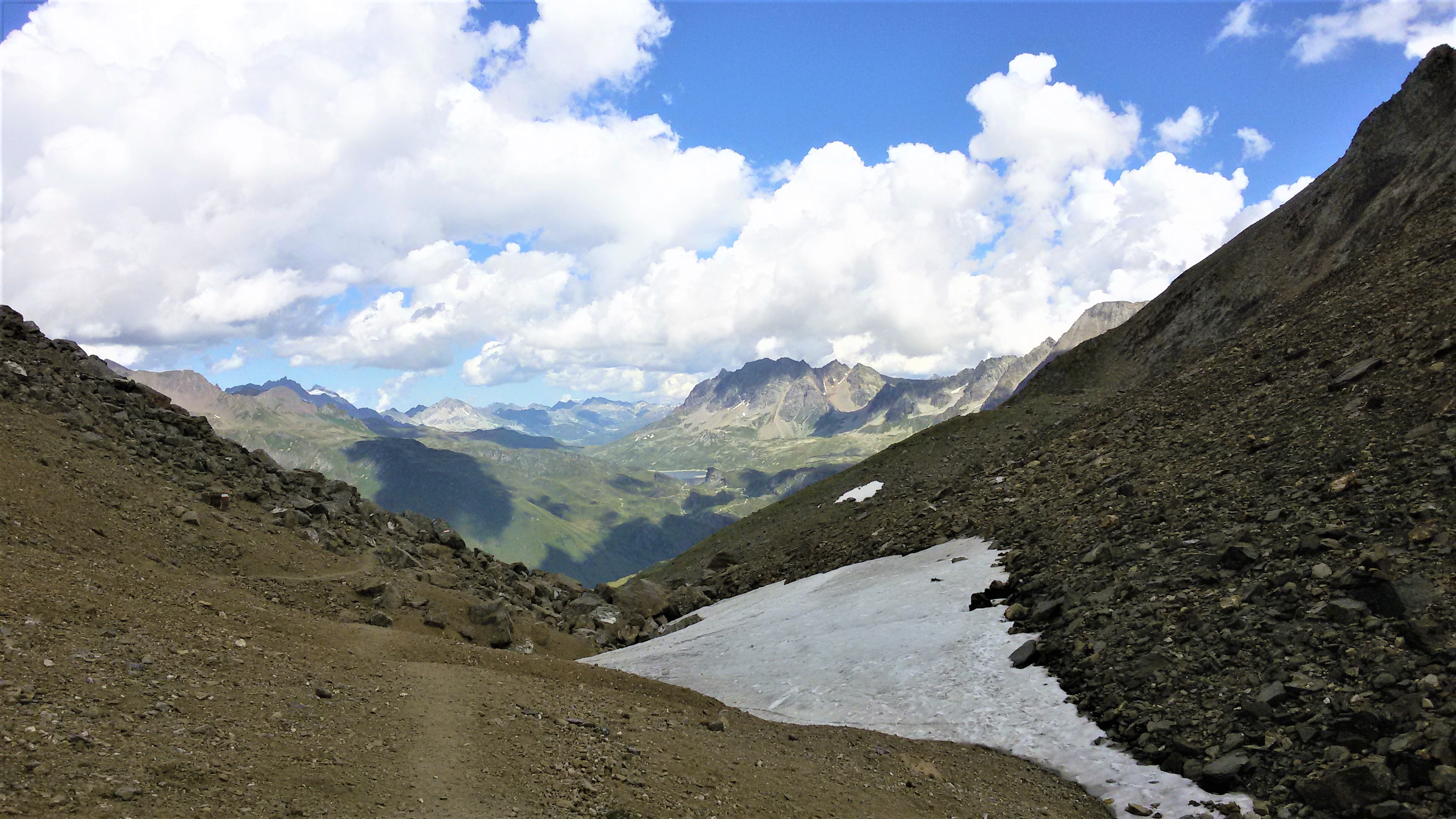 From Sagersboden (1,772 m / 5,813 ft, accessible by chairlift from Valdo or by foot from Canza), proceed along the farm track towards Alpe Vannino (trail G99). The Canza – Alpe Vannino ascent makes up part of the Blue Itinerary along the Via Alpina. Once you have passed the steep hairpin bends in the fir forest, you’ll emerge onto the long plateau that runs along the creek. On the right is the “Rocciodromo”, a 50 metre (164 ft) high crag featuring numerous rock climbing routes. After passing the brief detour to the left for Rifugio Miryam (an alpine refuge), proceed to the west through the Vannino Valley, towards the small dam and the overlaying wetlands. Continue along the slightly inclined route and, after a section on a plateau, you will reach the dam walls of the Diga del Vannino, located in the mountain pasture of the same name (Vannino is also the region where the famous Bettelmatt cheese is made). The Rifugio Margaroli (2,194 m / 7,198 ft) shelter is a short distance away, with a panoramic view opening onto the reservoir and the wide basin between Mount Giove and Mount Minoia.

From the mountain hut, take trail G97 which runs steeply towards the Nefelgiu Pass. Cross over the junction for Lake Sruer and climb up the sharply inclined valley which culminates in the rounded pass of Passo di Nefelgiù (2,583 m / 8,474 ft), with its views over the vast meadows of the Val Toggia, overlooked by Mount Basodino, towards the San Giacomo Pass. Descend into the valley below by following trail G95, towards the plains of Alpe Nefelgiu (2,048 m / 6,719 ft). From here, follow the pasture’s tractor road as it descends to Furculti and then to the Morasco Dam that contains the large reservoir of the same name. One final stretch on the paved road quickly leads to Riale. As an alternate route from Furculti, take trail G95b, dedicated to Mario Rigoni Stern, as it descends directly to Riale below. During the summer season in Riale (from 18 July to 21 August every day of the week, and from 1-17 July and 22-31 August on Sundays and holidays only) there is a bus line that descends to Domodossola (one single trip at 4:05 pm), thus allowing you to return to your departure point in Canza or Valdo. It is also possible to make the descent on foot, along Via del Gries (trail G00) flanking the Toce Waterfall: 1 hour and 15 min to Canza, 2 hours to Valdo.

Sagersboden (1,772 m / 5,813 ft), which is reachable by chairlift from Valdo. To get to Valdo, take the Domodossola – Formazza bus line

Walser architecture, Casa Forte a Ponte (the ethnographic museum of the Walser people and home to a collection of wooden statues, featuring examples from the German school from the 15th century onwards)

This route is located in the typical landscape of upper Val Formazza: vast grassy highlands interspersed with large reservoirs which have profoundly altered the landscape of the Ossola Valley. From Furculti you can descend to Lake Morasco or head directly to Riale di Sotto along the “Sentiero Rigoni Stern” (Rigoni Stern Trail). The bus line is active in the summer in Riale. As an alternative, you can return to Valdo along Via del Gries, passing by the Cascata del Toce (Toce Waterfall, trail G00, 1 h 45 min) Points of interest: Walser architecture, Casa Forte a Ponte (the ethnographic museum of the Walser people and home to a collection of wooden statues, featuring examples from the German school from the 15th century onwards)