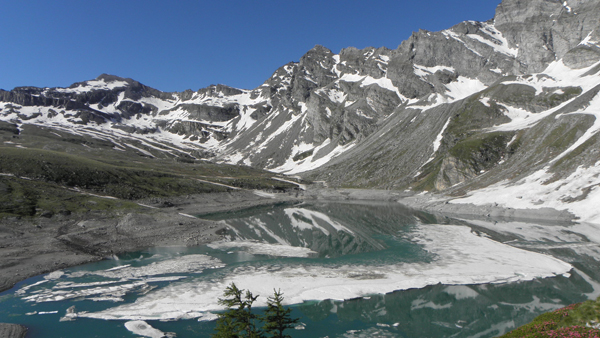 The walk around the Avino lake is an easy excursion resting within anyone’s reach: the circumnavigation of the lake is interesting but presents some risk of falling rocks on its west side. The paths have been widened and refurbished in the summer of 2004, so they are now equipped with steps and in some places made safer by including safety chains.

The excursion allows us to realize a ring-shaped path at the foot of the Lion Mountain (Monte Leone) and offers a reconciled view of the Veglia basin. Up until the beginning of this century, in the wide basin at the foot of the western side of the Lion Mountain (Monte Leone) there used to be a small natural Alpine lake, but the thirst for energy brought along a blockage forming a hydroelectric basin around 30 m deep with an area of almost 4 square kilometers. South-East of the water mirror just described we can find the Avino Plain, a desolate and deserted plain, where scanty water puddles can be found, that has always exalted mysterious and imaginative folklore legends.

From Veglia, around Ponte, a nice track (F30) in the woods goes up to the Witches’ Lake, a water mirror found around larch trees, becoming steeper so as to exit the forest following along the mountainside with more modest steepness up until we reach the dam via an evident and well-marked track. As far as the way back is concerned, it is advisable to go back about a hundred meters and take the F30a track which via regular hairpin bends takes us steeply down to the old station where the cableway begins. The path then follows along the woods coasting the Cianciavero Torrent on its left side thus reaching the potholes area and in a brief amount of time the Alpine lodging homes of Cianciavero.