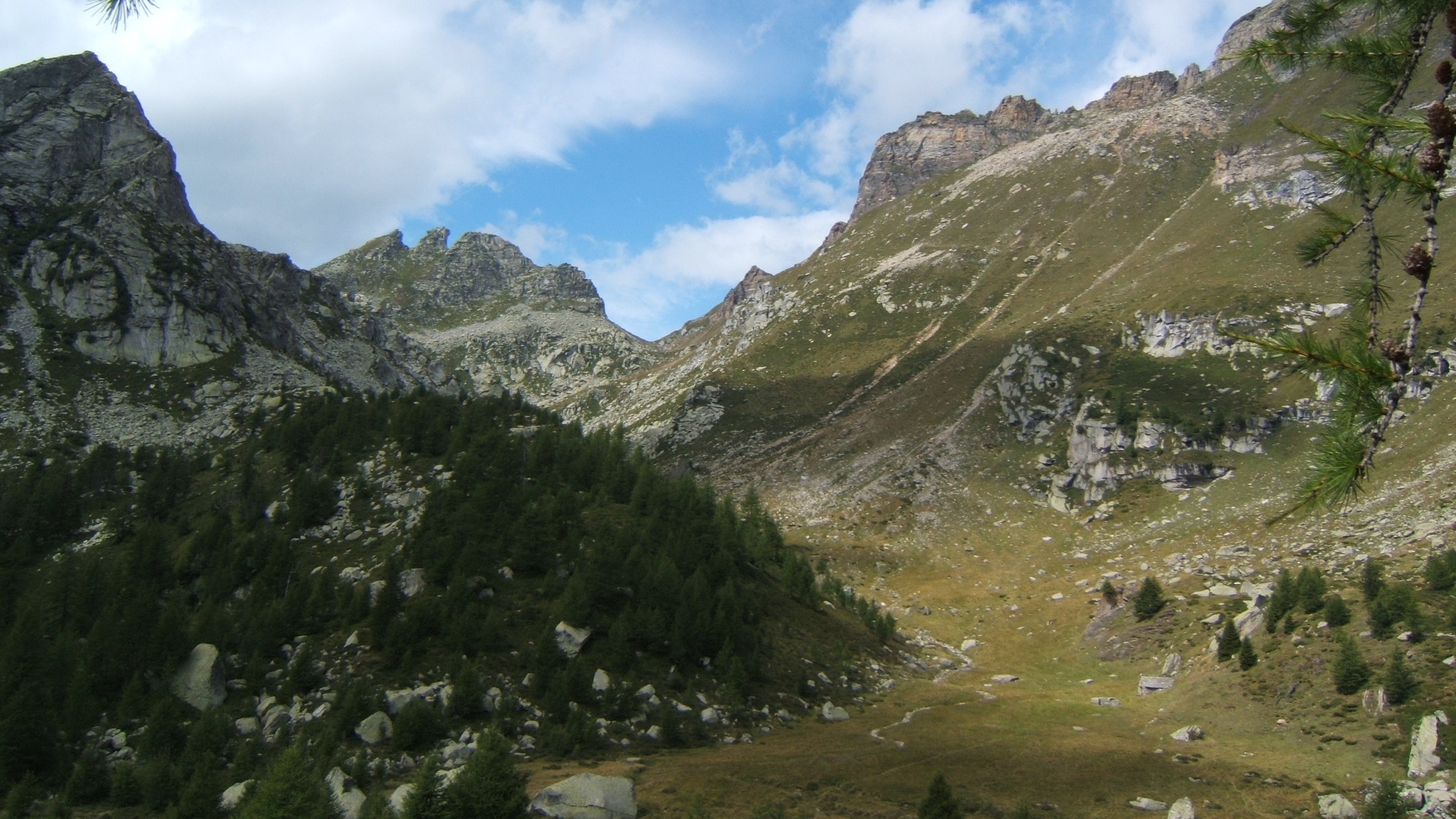 Salecchio is an ancient Walser settlement founded by German settlers relocating from Vallese in the XIII century. On such rocky terrace, a small community (of not more than one-hundred people) lived working the land and farming Alpine pastures for 700 years. The isolation and marginalization of this village caused such settlers to leave the village in 1966.

A road with flint stone paving and steps, carved in the immense granitic rocks, used to link Salecchio to the bottom of the valley, although the greatest linkages were with Agaro and Binn in Vallese. Among such thick network running along mountain tracks, the Small Wall Mountain Pass (Muretto Mountain Pass) was of paramount importance: this was where one could descend to the great Agaro Valley, where, via a long level path above Devero, one could cross the Albrunpass in order to get down to Binn.

The track from Devero to Salecchio allows us to follow ancient interleaved transit tracks allowing us to take a plunge into the history of these mountains which for several centuries consisted of intense liveliness made up of bartering and inter-personal relationships. From Devero we take a road towards Crampiolo passing from the nice outlined track which is still flint stone-paved and passes by Corte d’Ardui (trail mark H00). Just before Crampiolo we turn to the right (trail mark H16) and start going up to the larch woods. We pass a nice peat-bog and with a wide mountainside tract we come back till we cross the tractor trail up until we exit above the first Sangiatto lake which coasts through the mountainside along the road up until we reach the Sangiatto Alp at an altitude of 2010 m. From here we take a path on the right towards the Scarpia Small Mouth (2248 m), with such path striding across a saddle-shaped mountain surface allowing communication to take place with the great valley of Agaro: from here we can glance at the beautiful encircling mountains. From the small mouth we can descend gradually along the mountainside up to the Poiala Alp (2148 m), the greatest of the Alpine pastures of the Agaro Walser people. From the Alpine lodging-houses we descend lightly until we cross the small torrent and go back up via wide prairies (where the path is not very well traced) up to facing the great Agaro valley. A mountainside tract allows us to descend down to the great valley of Agaro. A trail along the mountainside allows us to go down to the great valley and thus quickly go back up till we reach the Muretto Mountain Pass. From the Muretto Mountain Pass we can go down along the mountainside till we reach Upper Casarola, and from there go back up along a ridge up to come out at the top of the Agaro Walser settlement. From the Alpine lodging-houses we can descend one bit at a time up until we cross a small torrent and then go back up via wide (not very well marked) prairies up until we face the great Agaro valley. A trail along the mountainside allows us to go down to the valley and then quickly go back up till we reach the Small Wall (Muretto) Mountain Pass. From the Small Wall Mountain Pass we descend along the mountainside until we reach upper Casarola from where we slightly go back up a ridge till we reach the other side of the mountain and go down the Salecchio Alp. From here the path decisively enters the woods and having passed Corticc goes down to Upper Salecchio where it is possible to stay overnight at the Zum Gora Mountain Hut. As far as the way back is concerned, one can choose among the two following possibilities:

1. One can go down to the Passo area (along a bus line) following a very nice path (G21), which is partly stone-paved which first goes down to Lower Salecchio, thus cutting the hairpin bends belonging to the unpaved road and arriving to the mouth of a tunnel. The path follows on the right of the tunnel also passing across a stone-paved tract with a nice rock carving, thus we proceed following the directions but in the end the old trail no longer exists so we must follow the road down to the bottom of the valley.

2. From Upper Salecchio it is possible to continue in slight ascent up to the Francoli Homes thus reaching the Vova Alp. From here onwards we can go down following the road and the brief marked tracts of the track up to the Chioso area. Otherwise, it is possible to proceed from Vova taking the track marked G27 which via a long mountainside road brings us to Altillone and thus following the small access road crosses the paved road just uphill from the Casse hairpin bends, just before Fondovalle.

E (medium difficult) - The uphill track from Sangiatto Upper Lake is rather ruined and is comprised of various tracks resulting from cows put out to pasture.