The ancient road which through the Arbola Small Mouth (Bocchetta d'Arbola, 2409 m), used to link the bottom of the Ossola Valley to the Binn Valley and thus to inner Switzerland is very important in the history of movements across the Alps. The Arbola is the lowest and most comfortable mountain pass of the entire Lepontine Alps, only second to Sempione on the Ossola Mountains. While the crossing of the Boccareccio, Cornera, and Della Rossa Mountain Passes is made difficult by the imposing rock ramparts which make it hard for people and impossible for work animals to cross, the flint stone-paved Arbola mule track used to allow long lines of work animals carrying merchandise to transit, making it a great caravan route through the Alps.
The ancient Arbola Way (Via Arbola) is one of the “Cultural Itineraries of regional interest of Switzerland”. The Lepontine Alps, not too far from the Gottardo where rivers which go down in the same direction as the four winds are born, have always been of fundamental importance as part of the network of roads through the Alps: the Arbola takes us to Binntal, the Gries takes us to the Hasli and thus to Oberland, and the Saint Giacomo (“Valdolgia mountain”) Mountain Pass takes us to Airolo and Ticino.
The “Antigorio Road” towards Baceno, the Devero and the Arbola (“the “lower mountain pass”, which distinguishes it from the “upper” or “glacier” mountain pass, namely the Gries Mountain Pass), has been for several centuries the main commercial artery between Vallese and Lombardy. This is so true that even ancient maps define the Arbola as the “mountain pass towards Lombardy” (Pass gegen Lombardy, Sebastian Munster, 1550) or as the “mountain pass towards Milan” (Pass auf Mailand, Gabriel Walser, 1768).
In the Middle Ages, when people began to cross the high Alpine passages to exchange merchandise and ideas, the stops at Baceno and Ernen grew in importance. The villages at the foot of the passage (Baceno, Binn, Ernen) came to be considered by historians as “mountain pass settlements” whose mercantile functions would match its pastoral ones. Up to the XIII and XIV centuries, when the Gondo gullies at Sempione were geared with wooden overpasses anchored to the rock with chains, the Arbola Mountain Pass was the “door to Lombardy”. Grain and wine as well as silk and oriental spices would go up to the north while salt, cheese, and livestock would go down to the south. Baceno and Croveo saw the growing up of dynasties of merchants that crossed Alipne Europe bringing with them, among other things, salt smuggled from the Hall mines near Salzburg to the Ernen market through the “transversal way” of the Saint Giacomo Mountain Pass, Scatta Minoia, and the Arbola Small Mouth (Bocchetta d’Arbola). These merchants developed a branched network of trans-Alpine relationships with the Swiss cantons of Uri and Unterwalden, crossing high-altitude passages, while owning meadows and pastures used to feed herds bought in Switzerland to be sold at Lombardy markets, and cellars for keeping wine and cheese.
The itinerary of the ancient Arbola Way (via dell’Arbola) is crossable in three stages on easy well-marked paths, and as part of the path we still go through those ancient stone-paved mule tracks. 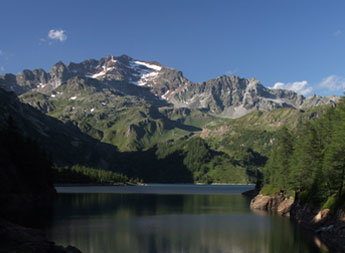