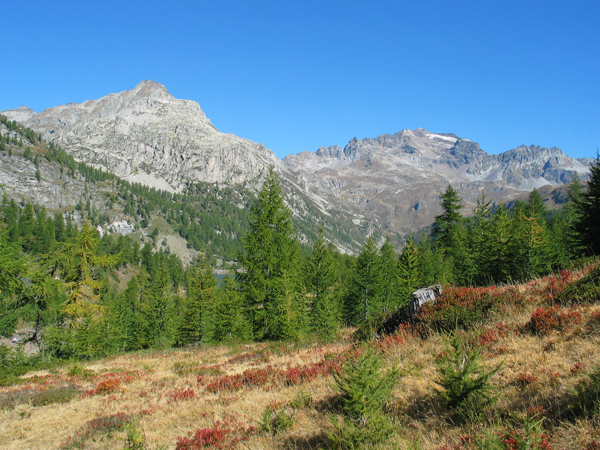 From the church of Devero, cross the plain to the village of Cantone and enter the H15 trailhead, which flanks the stream, then becomes slightly steeper amongst the large serpentine boulders that emerge from the larch forest. You’ll soon reach the meadows of Campello and, having passed the last chalets, the trail becomes a bit more difficult: the path rises sharply with numerous stairs until reaching the Rossa plains. Turn to the right and, having passed a stream, begin the difficult climb. You will emerge right below a cliff wall that supports the pass on the Italian side and which seems insurmountable. If you look closely, however, you will see an 8 metre (26 ft) high iron “ladder” that will lead over a short rocky span of the flank (proceed with extra caution). Shortly after, you will finally reach the large, rocky plateau with clear signs left by the passage of glaciers. Cross this plateau with due attention: carefully follow the painted trail markers to maintain your sense of orientation. At the end you will reach the Rossa Pass, which stands out for its countless stone cairns.
Passing the obvious trail that descends towards Lake Geisspfad and head to the right, following the signs that lead you over a scree of rock debris and stones until the recess of the Crampiolo Pass. The jagged crest of Geisspfad’s pinnacles will stand out against the sky, reflected in the nearby pond. Begin heading downhill (trail H17) and walk along the valley floor until you come to the sharp slope that descends into Val Deserta. In this stretch of the trail, you may find steep snowfields, even in late summer. If the snow is hard, it may be dangerous to climb down it without crampons. When the snow melts, a portion of the trail will likely remain slippery. This section thus requires experience and a high level of technical ability. Once having arrived at the bottom of the slope, cross the wood bridge over the Valdeserta River to arrive at the region’s chalet (2,047 m / 6,716 ft). From here, the trail heads into the larch woods and descends down to Lake Devero, skirting the creek until it crosses the path that circles the lake. Turn right to cross the bridge over the river and continue on to a nice, flat clearing. A short uphill section leads to a panoramic lookout over the lake and then flattens out for a bit before coming to the dam. From here, you can return to Crampiolo. To go to Devero, follow the path that connects from Vallaro.

Notes: Before arriving to the plateau of the Rossa Pass, it is necessary to climb an 8 m (26 ft) vertical ladder. The vast, rocky high plains before the pass should be crossed by carefully following the painted trail markers so as to not become disorientated.

EE (difficult). The entire trail is quite steep.

The Rossa Pass (or Geisspfad pass) is a broad rock crossing known for the marks left by ancient glaciers as they scraped across the whaleback-shaped boulders. This is the land of serpentine, green rocks that take on a characteristic reddish colour when they come into contact with the elements, thanks to their iron oxide content.

Before arriving to the plateau of the Rossa Pass, it is necessary to climb an 8 m (26 ft) vertical ladder. The vast, rocky high plains before the pass should be crossed by carefully following the painted trail markers so as to not become disorientated.