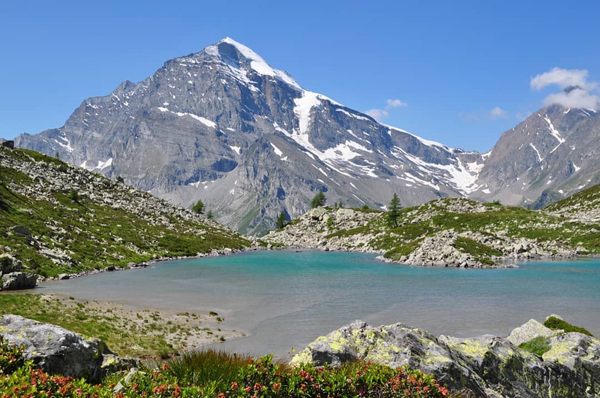 In June, when the last bits of snow melt down, the lake is full of water and in it the pyramidal peak of the Lion Mountain (Monte Leone) and the cusp of Terrarossa are reflected in the water; the waters are so transparent that we can only see the limestone at the bottom.

The White Lake (Lago Bianco) is a lake which can be found at the foot of the Boccareccio bastion and D’Erbioi Plain (Pian d’Erbioi). The lake is the largest of the 23 natural lakes present in the Veglia area having a surface of about 16,700 square meters. The environment, dominated by the great vertical area of the Piodelle Peak (Cima delle Piodelle) reminds us of a corner in the Dolomites resting upon a very steep yellowish rock from which rocky monoliths stand out.

The itinerary starts from the Veglia Alp plain in the Cormù area and then follows across the F22 path towards the White Lake. We first cross a nice larch wood and then once the woods’ boundary has been surpassed the path gets steeper and steeper as well as slippery along such tracts (so be careful!) until we reach White Lake. We coast along the lake, crossing a cobbled road and then go back up a ridge up until we reach the Erbioi Plain (Pian d’Erbioi), where take the path towards the Boccareccio Mountain Pass (Passo di Boccareccio). We start going down (track number F22a) and in a brief amount of time we reach the Du Scricc Plane (Pian du Scricc) where we undertake the classical Devero – Veglia traversal. Following the F99 path we go down along the Rio Frova Valley, coasting the torrent’s gully and finally passing behind the CAI Mountain Hut we get back to the Veglia Plain.